Creating a future of relevance 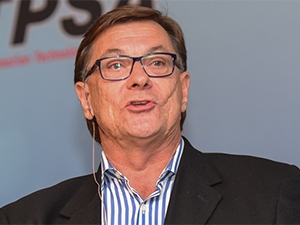 There is a "technological tsunami" that is impacting on all businesses at the moment, says Anton Musgrave, business strategist at FutureWorld International.

If businesses are to survive, they must aim to build a future of relevance.

That was the word from Anton Musgrave, entrepreneur, businessman, futurist and business strategist at FutureWorld International, speaking during a keynote address at the IITPSA President's Awards held in Johannesburg last week.

According to Musgrave, the biggest reason organisations miss the future is that they are so pre-occupied about the operating in the present.

"In this industry, we should be looking into the future all the time. We have to understand that if we are to operate the business of today in the present, we must hold a clear picture of the future in our minds because what we do today successfully will not create revenue in the future," he said.

He pointed out there is a "technological tsunami" that is impacting on all businesses at the moment. Across all industries, financial service in particular, there has been the emergence of new rude competitors, he said.

These are the young fin-tech start-ups that think differently with the intent of destroying the existing systems. The incumbents are struggling with these new aggressive competitors who are breaking all the rules, said Musgrave.

At the same time, he noted, clients and consumers are asking tough questions to businesses. Increasingly, the staff members, because of BYOD, are even asking difficult things from their employers.

"So it requires that businesses think differently in the world that we are living in. It has been predicted that in the next few years, 50% of all the banks in the world will disappear. This is crazy and that's only one industry and I think that's going to happen in every single industry."

Musgrave believes one of the biggest forces that will shape the future is the radical openness that is happening in the world.

"If you don't have a strategy for a radically open world, you will simply not survive. In an online, connected, open and transparent world, we have to see things differently. We have to think that every single thing about our operations, value propositions and how we serve customers will change."

However, he said in this open world, it's not all bad news. "But think about what openness and transparency really gives us when we make use of IBM Watson's super-computing power and offer that, freely accessible, to every young entrepreneur around the world."

They can tap into the power of IBM's Watson and test business models of their entrepreneurial ideas for free, he added. "If you think of what IBM's Watson can potentially do when add the entire medical history – every medical book, every medical journal that has ever been published into Watson – we get about 94.6% accuracy in diagnosis in 12 seconds."

It means we can deliver first world healthcare in the most remote parts of the world through connectedness – accessing these kinds of facilities at low cost, he said.

However, what is going to happen in the next five years is that radiographers around the world will be unemployable because it will be possible to do any kind of diagnosis or X-rays in 12 seconds, he said.

"We are living in a world that is described as VUCA – volatile, uncertain, complex and ambiguous. The world has become different because of the attitudes and the interconnectedness of the people. Look at what happened to Naspers – from a small conservative paper-based newspaper in the Western Cape, not so many years ago, but today a global media giant."

But what is really striking is Naspers today is now worth more money than the entire gold and platinum industries in SA, he revealed.

"So we have to think of how we are going to build a country of future relevance. This is not very difficult to do – we just must not miss the future."

Musgrave observed that business is generally designed and built for a physical world distributing goods in markets with paper processes, employing thousands of people most of whom are highly skilled in processes that are no longer relevant in tomorrow's world.

"So what this shows is that in the next 20 years, no job will be safe. Robotics has already started taking over in mines. Driverless motor cars are also coming as well as 3D printing. We are living in an era of digitising absolutely everything – we can talk about examples like Uber and Airbnb etc but the digitisation of everything is disrupting real industries. When that disruption takes place, it changes underlying business models fundamentally and profoundly."

He noted it's believed that for every single Uber car that is on the road, potentially 13 cars don't need to be bought by end users.

"This is profound, and it's only the beginning. But when this picks up pace, it will eventually democratise the process."